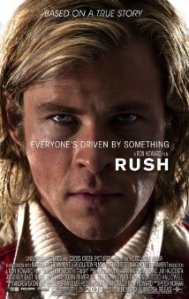 Based on a true story, Rush follows the rivalry between Formula 1 drivers James Hunt and Niki Lauda.

Although Formula 1 and sports-related movies aren’t really my thing, this has been getting fairly good reviews. The trailer looked sufficiently dramatic, and there wasn’t really much else showing of interest. And, y’know, Chris Hemsworth….

The film features mainly on the tension between the two main characters and the differences in their lives and the way they approach racing. Although there was some track action for those who like that, I wouldn’t say it was the main focus of the film. Although at one point I did have to watch through my fingers!

I have to give the makers of Rush credit for making me want to see something sports related. Although its not something I would watch again, I did enjoy it and it was a lot more dramatic than many sports-related movies! 7/10 stars.

The Fifth Estate is also based on a true story; of the scandal behind Wikileaks.

There were two main reasons I wanted to see this film. 1) I didn’t know much about Wikileaks and thought it was a good opportunity to become a bit more knowledgeable and 2) Benedict Cumberbatch.

I felt like the film was good and I definitely came away feeling more informed. Unfortunately, I also felt a little bored. There was next to no action in this film, and no suspense at all.

However, I did come away wanting to find out more about Wikileaks and it did make me think about censorship, and whether revealing secrets (especially those of national security) is a good thing or not. I’m all for free speech, but when it potentially endangers others, especially those undercover, the line becomes very blurry between right and wrong. 7/10 stars.