This week I am RESTRAINED. (sort of).

Lisa you are a star! Random House I ADORE YOU for sending a copy of this.

I know, I know, I shouldn’t be requesting any books. But this looks awesome, thanks Netgalley and Mira Ink.

Thanks Netgalley and Adams Media, this sounds exciting. 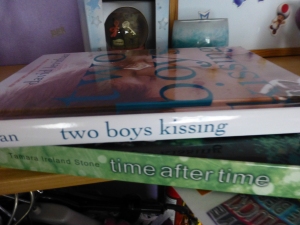 Version: Paperback from publisher (review my own, honest opinion)

Anna and Bennett were never supposed to meet: she lives in 1995 Chicago and he lives in 2012 San Francisco. But Bennett has the unique ability to travel through time and space, which brings him into Anna’s life, and with him a new world of adventure and possibility.

As their relationship deepens, the two face the reality that time may knock Bennett back to where he belongs, even as a devastating crisis throws everything they believe into question. Against a ticking clock, Anna and Bennett are forced to ask themselves how far they can push the bounds of fate, what consequences they can bear in order to stay together, and whether their love can stand the test of time.

Fresh, exciting, and deeply romantic, Time Between Us is a stunning, spellbinding debut from an extraordinary new voice in YA fiction.

As soon as I heard the comparison to The Time Traveller’s Wife, I knew I had to read this book. While they are quite different, I loved Time Between Us just as much. Bennett can travel in time, and can take things and people with him. When he stumbles into Anna in 1995 looking for his sister, he decides to stick around.

This book was as beautiful as its cover. It was romantic, cute and sad and I couldn’t put it down. Heartbreak was inevitable as they did not belong together; his timeline was 17 years ahead of hers. Not to mention the risk that he may ‘bounce back’ at any time.

I like how it tampered with the idea of the butterfly effect, but I think in practice it didn’t all quite come together. Bennett was very willing to change things for his own benefit, but when it came to someone else he kicked up a massive fuss. Even though his entire presence in the book was wrong! But I have to forgive him, because he is adorable 😉

I thought that Anna too was a really strong character. When cute boy Bennett saunters into her life and offers her what shes dreamt about her whole life, she does take her time and think it over. She has her own personal strengths, and especially in the end I really rooted for her.

The only thing I didn’t particularly like about the book was that it was over too soon! I felt it ended a bit abruptly, just as I was losing myself in the story. I’m hoping that the sequel will answer all my outstanding questions, and give me greater character development.

One thing’s for sure, and that is I NEED the sequel, asap! It’s due for release at the end of October, and I can’t wait to find out what happens to Anna and Bennett.

This book is about love, connections and consequences. I adore the idea of toying with fate, and the butterfly effect that ripples afterwards. Strong characters and an enticingly romantic storyline makes for an AMAZING book. Roll on October! 4.5 sofas. 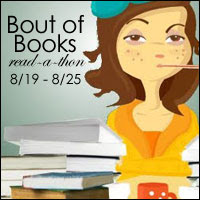 While I didn’t manage to read all the books on my goal pile, I did finish two of them. I have started Diary of a Mall Girl and have also read Time Between Us by Tamara Ireland Stone.

I took part in the Twitter chat on Saturday.

My review of Every Day is already up and a review of The Screaming Staircase is going up on Thursday!

While I did speak to some new people during the Twitter chat I’m not sure I made any friends as such. I have been trying to comment on blogs overall but haven’t really seen that many Bout of Books posts in my blogroll.

Overall I count my Bout of Books progress as a success! I’d only read about 3 books in a month prior to the readathon, so to get through that many in a week makes me really happy. It has definitely put me in the mood to read again, which is a priceless reward.

Did you manage to meet all your goals?

Bout of Books 8.0 started on Monday. I did a lot of reading on the first day, but not as much since. I’m also going to use this to record any challenges.

Number of pages read: 373 (technically I started this Sunday night, but I’m going to count them all)

Books: Every Day by David Levithan 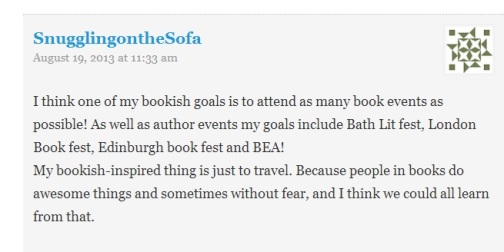 Books: Diary of a Mall Girl by Luisa Plaja (60 pages)

Vivian Versus the Apocalypse by Katie Coyle (50 pages)

Happy weekend! I tried to be good, and then I discovered a website of half price books and it all went downhill from there….

The Curse of the Gloamglozer by Paul Stewart and Chris Riddell

The Winter Knights by Paul Stewart and Chris Riddell

Clash of the Sky Galleons by Paul Stewart and Chris Riddell

Thanks to Random House! Time Between Us is a duplicate copy but I’m sure it will find a home somewhere. The other three are the first in the Edge Chronicles, and the new covers are amazing!

How I Lost You by Janet Gurtler

If He Had Been With Me by Laura Nowlin

Welcome to my book haul this week! I haven’t received any ebooks or books from the library, but I was bad and bought quite a few this week!

Thanks very much Random House! If this is anything like Time Traveller’s Wife I will adore it.

Another Way to Fall by Amanda Brooke

This looks really cute and sad and the cover is gorgeous! Many thanks Harper Collins

The Knife of Never Letting Go by Patrick Ness

The Miseducation of Cameron Post by Emily M Danforth

Struts and Frets by Jon Skovron 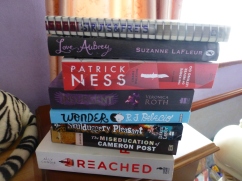 The Taming of the Tights by Louise Rennison

The Blood Keeper by Tessa Gratton

Thanks very much to Caroline from Big Book Little Book!