I am thrilled to be able to reveal today the UK cover of The Naturals, the start of a new series from Quercus by Jennifer Lynn Barnes. Due to be released on the 7th November, this series looks like its full of power-strong girls including Cassie. A school working with the FBI for teens with exceptional abilities? Sounds like all sorts of awesome to me!

Identified by the FBI as uniquely gifted, Cassie is recruited to an elite school where a small number of teens are trained to hone their exceptional abilities.

For Cassie, trying to make friends with the girls, and to figure out the two very different, very hot boys, is challenging enough. But when a serial killer begins recreating the details of her mother’s horrific crime scene, she realises just how dangerous life in The Naturals could be…

Today I am thrilled to be sharing with you the title and cover of Karli Perrin’s new book April Fools. The first in the series, April Showers, followed April as she began life at University. If you check out my review here, you’ll know that it ended with a bang! I CANNOT WAIT to find out what happens in April Fools. It’s expected to release in December 2013, so it’s definitely on my Christmas wishlist!

Love. Hate. Fear. Fate.
All four letter words.
All consuming.
Naked to the eye, they have the power to control the heart and destroy the soul.
April Adams is about to experience them like never before.
When everything in April’s life goes up in smoke, she is faced with some life changing decisions.
Join April as she continues her journey of love and loss.

Karli Perrin is a 25 year old English Language & Linguistics graduate from Manchester, England. She has always been a big lover of books and is the author of the ‘April’ series.

She is a big believer of fate and is a sucker for a happy ending. She honestly believes that there is a reason why you are reading this right now (apart from the fact that you are awesome!) Her ultimate goal in life is to live in a house made entirely out of books with her best friend, who also happens to be her fiancé.

…Hogwarts is plan B.

Thanks to Court from Love N. Books for organising.

I am absolutely BOUNCING to reveal the cover for Geek Girl 2: Model Misfit by Holly Smale!

It’s everything I expected for her sequel: funny, emotional and geeky! I adore the yellow, and I love that they’ve kept a good theme with the first one. In my review for Geek Girl, I gave it 4 sofas. It is one of my favourite UKYA books, and I won’t hesistate to mention Geek Girl everywhere I go. It’s one of my most-wanted books of 2013, so I encourage you to preorder GG2 now, and go read the first one if you haven’t already!

To celebrate the geekiness that is Model Misfit, I thought I’d share with you some geeky things I’ve got planned for the rest of the year!

1.  In September, they are having a screening of Indiana Jones: Raiders of the Lost Ark in the grounds of a local castle. I’ve never been to an outside film screening before, so I’m really excited! I’ve also not seen Indiana Jones before (I know, right) and it seems the perfect way to end the summer 🙂 Lets just hope its not raining…

2. Harry Potter Studio Tour. I attended this with one of my friends last year, but I snapped up the opportunity to go again! I don’t think I will ever get enough Harry Potter, and there is SO MUCH AWESOMENESS that you can’t really take it all it at once.

3. Bookish things! They are many amazing book-related events coming up, and I adore attending them. Not only to meet authors, but I love spending time with other bookish people, and have made some really lovely friends through these events. Some of the authors I am planning on seeing are David Levithan, Phil Earle, Sarah J Maas, RJ Palacio, Laura Jarrett, Sally Gardner, Lauren Kate and Tanya Byrne.

This is where you help me out! What geeky events would you recommend (preferably UK based)? I’m always looking to add things to my list so I’d love to hear geeky things you have planned. Also let me know if you’ve been somewhere lately and thought it was awesome!

Today I am delighted to share with you the cover for Cora Carmack’s new novel, Finding It. The second companion novel to Losing It, it takes place from Kelsey’s perspective as she travels Europe. Due for release October 1st by Harper Collins (US) and September 26th by Ebury Press (UK). Please note that the image below is for the US cover.

I can’t even begin to express how excited I am to be able to read more from Cora. Just thinking about her books puts a smile on my face!

Most girls would kill to spend months traveling around Europe after college graduation with no responsibility, no parents, and no-limit credit cards. Kelsey Summers is no exception. She’s having the time of her life…or that’s what she keeps telling herself.

It’s a lonely business trying to find out who you are, especially when you’re afraid you won’t like what you discover. No amount of drinking or dancing can chase away Kelsey’s loneliness, but maybe Jackson Hunt can. After a few chance meetings, he convinces her to take a journey of adventure instead of alcohol. With each new city and experience, Kelsey’s mind becomes a little clearer and her heart a little less hers. Jackson helps her unravel her own dreams and desires. But the more she learns about herself, the more Kelsey realizes how little she knows about Jackson.

Welcome to the cover reveal for Endure, the first in a duology by Laura Diamond. It releases in ebook on July 12th, with a print copy to follow. First, the synopsis:

Seventeen-year-old Justin’s anaemic blood is a blessing. Or a curse. It all depends on who you ask.

To most of the immortal Vie, his blood is a scourge: untouchable and useless. To some Vie, his blood is a drug. To Justin, it’s something that gets him in a lot of trouble. Being poisoned by a Vie is just one example. His sister getting kidnapped is another. Whether it’s being coerced by a deluded cult leader, or negotiating with Alex—an Vie scientist addicted to Anemie blood—Justin struggles to keep every mutated drop of blood he’s got.

His fight for survival gets more complicated when he meets Alex’s slave, Cara. Despite coming from different worlds, they’re both prisoners, at risk of being drained by a hungry Vie any moment. When she risks her own neck to help Justin find his sister, he’s left with a terrifying choice.

Saving what’s left of humanity. Saving his sister. Saving the girl he loves. Or sticking a stake in Alex’s chest.

Justin can’t decide which option will get him killed first.

I really love the purple/green background and the girl. It feels like she’s got a story to tell!

Laura Diamond is a board certified psychiatrist and author of all things young adult paranormal, dystopian, horror, and middle grade. Her Young Adult Paranormal Romance novelette NEW PRIDE was published November 2012 and her novel SHIFTING PRIDE debuted December 7, 2012 from Etopia Press. Her short story, CITY OF LIGHTS AND STONE, is in the DAY OF DEMONS Anthology by Anachron Press (April 2012). Another short story, BEGGING DEATH, is in the CARNAGE: AFTER THE END Anthology by Sirens Call Publications (November 2012). Her upcoming YA, ZODIAC COLLECTOR, is coming late 2013/early 2014 with Pugalicious Press. When she’s not writing, she is working at the hospital, blogging at Author Laura Diamond–Lucid Dreamer (http://lbdiamond.wordpress.com/), and renovating her 225+ year old fixer-upper mansion. She is also full-time staff member for her four cats and a Pembroke corgi named Katie.

I am very pleased to share with you today the new cover for April Showers by Karli Perrin. A brilliant NA novel combining romance and fate, it is released June 14th. Also look out for my blog tour post at the end of the month!

What happens when your head and your heart pull you in completely opposite directions?

April Adams is about to find out the hard way.

Isaac Sharpe is the hottest guy on campus – with an even hotter reputation. After a chance meeting, April quickly finds herself wrapped up in all that he is. But what if all that he is isn’t what it seems?

Caught up in a battle between what she wants and what she thinks she needs, April meets Lukas Roberts. Lukas is the security blanket that she craves so desperately and she finds solace in their friendship. But what happens when she finds more than she bargained for?

April has always been a big believer of fate, but will she learn that she’s in control of her own destiny before it’s too late?

Join April as she embarks on a life changing journey of love and loss, which will have you laughing and crying until the very end. 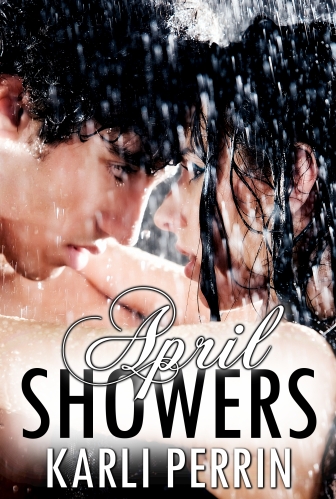 Karli Perrin is a 25 year old English Language & Linguistics graduate from Manchester. She has always been a big lover of books and is currently writing her first NA novel – April Showers. She is a big believer of fate and is a sucker for a happy ending. She honestly believes that there is a reason why you are reading this right now (apart from the fact that you are awesome!)

Her ultimate goal in life is to live in a house made entirely out of books with her best friend, who also happens to be her fiancé.

…Hogwarts is plan B.

Today I have for you the cover reveal of A Matter of Heart by Heather Lyons, book two in the Fate series. You can check out my review for the first book here.

No longer in high school, Chloe Lilywhite is now living and working in Annar, the Magicals’ city-state plane of existence. Since moving, she’s joined the Council, gone on missions with the Guard, moved into her own apartment, and enrolled at the University of Annar. Plus, she’s happily engaged to be married to Jonah Whitecomb, the literal man from her dreams, not to mention her Connection. While she still struggles with aspects of her craft, Chloe feels like she’s finally coming into her own, especially after a difficult year that had her questioning nearly everything in her life.

After a brutal attack by the Elders, her life is turned upside down once more. Accusations fly throughout the Council and Guard, forcing Chloe to confront her worst fears about what’s she’s capable of as a Creator. And then there’s the matter of Kellan Whitecomb, Jonah’s twin brother and Chloe’s ex, who resurfaces after disappearing months before. Although Chloe chose Jonah, and despite their best efforts, the two find it hard to stay away from one another.

But no matter what Fate throws at her, Chloe is determined to take charge of her life, even as it begins to spiral out of control.

A MATTER OF HEART is book 2 in the Fate Series, a mature Young Adult/New Adult fantasy, and is due out in June 2013.

I love the typography of the cover! One of the things that struck me about the first book was the emotions, and the sequel looks like it is going to be just as intense.

Heather Lyons has always had a thing for words—She’s been writing stories since she was a kid. In addition to writing, she’s also been an archaeologist and a teacher. Heather is a rabid music fan, as evidenced by her (mostly) music-centric blog, and she’s married to an even larger music snob. They’re happily raising three kids who are mini music fiends who love to read and be read to.

Snuggling On The Sofa
Blog at WordPress.com.